Alpa Precision L.L.P. has been proudly servicing the oil and gas industry since 1981. After 30 years, they stand to be one of the top independent machine shops in Houston, TX, with outstanding service and prestigious clients.

Using a variety of CNC and EDM machines and specializing in exotic metals such as Inconel, Titanium and MP35, Alpa Precision manufactures prototype part jobs, as well as production jobs from all sectors of the energy industry, and more.

In today's cost conscious and highly competitive manufacturing market, “job shop” owners are finding that prospects and customers want more than one final number in their part quote. They want, among other things, part quotes spelled out with multiple quantities. However, when estimating through a manual approach the routine of duplicating estimates with multiple quantities can get tiresome, over-whelming and become dreadfully error-prone. Additionally, customers frequently ask for additional quantity updates long after the estimate or quotation was prepared. This additional request causes even more delays and problems.

When repeating or duplicating steps in any estimating process it can become frustrating. Worse yet, when things cause frustration it can lead to increased opportunities for errors. Occasionally, the entire estimate may need to be copied and then recalculated. This duplication, transposition and manual recalculation process has a tendency to increase errors and inconsistencies which otherwise could be prevented if the process included cost estimating software.

“As I continued to be challenged by these increasing ‘multiple quantities’ requests, I would sit at my desk thinking there has just got to be a better way,” reports Owner and President, Alberto Lozano at Alpa Precision LLP. “Repeating these steps, for each estimate, was not only time-consuming and frustrating; I felt it was leaving ‘way too much’ room for error - which is something I simply cannot afford.”

Alpa Precision LLP implemented Costimator® in April of 2013 and since then have seen measurable improvements in their ability to respond to quotes more timely - at the very least a 20% time savings. These time savings have been realized on the initial orders as well as when customers have follow up change requests. Additionally, Costimator® did not just solve the ‘multiple quantities’ request issue, now other items in the estimates can be modified quickly. This includes changing or adding new work centers, swapping out materials, and among other things comparing multiple estimates to find the best or least cost manufacturing process.

“I searched on the internet, for cost estimating software, and found Costimator® and after seeing their online demo, I said wow this is what I’ve been hoping to find,” reports Lozano. “Additionally, the software includes a wealth of manufacturing data, pretty much all the data I’ll ever need.”


“Costimator® is truly a powerful cost estimating and quoting software program and I know there are still features I’ve not yet begun to realize,” remarks Lozano. “Now, as I continue to use the system and as MTI Systems keep adding more features and benefits in their software updates, I’m finding new ways to improve success with my estimating.”

"The main purpose of using Costimator is to understand what your costs are and what they should be. Once you understand that, you are in a good position to achieve those costs. Knowing what you should be paying when you go into a negotiation gives you a lot of strength." 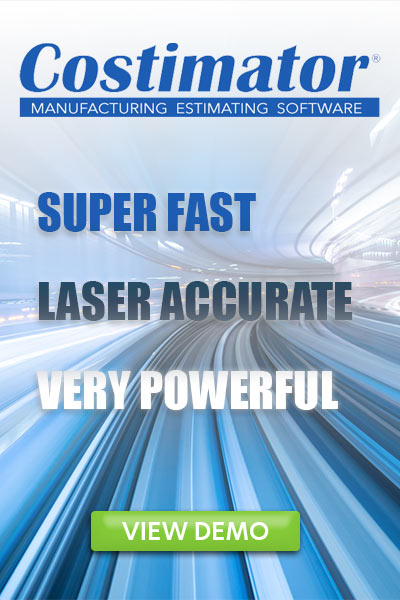